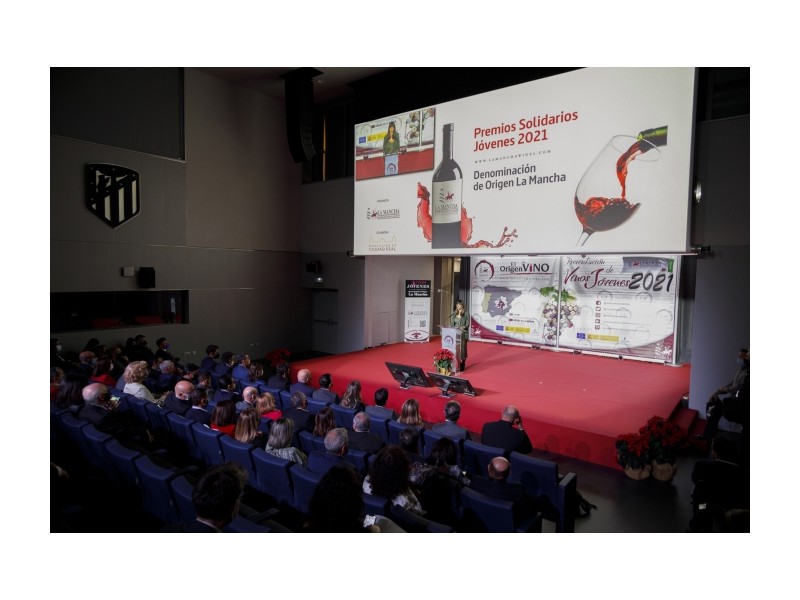 The karatean Sandra Sánchez, the influencer María Pombo, the meteorologist Roberto Brasero and the filmmaker, Pedro Almodóvar as the Gran Reserva Award, are recognized for DO La Mancha wines.

"From Madrid to heaven and from La Mancha to the world", with these words the journalist from Antena 3, Lorena García, host of the event, presented the 2021 Young Solidarity Awards gala. trajectory and progression of those outstanding people in their different facets and fields of culture, communication and sports.

An act that this year has had double incentive for attendees, after the forced stop of the pandemic, last 2020. The face-to-face appointment was recovered and also in the Wanda Metropolitano, rojiblanco stadium, turned into a new stage for the occasion. "For us it is always to recover the human and face-to-face warmth, with the affection of the public and the noise of the toast of the glasses". They were the welcoming words of the President of the Regulatory Council, Carlos David Bonilla.

Bonilla wanted to remind all the winegrowers "that they are no longer with us", with a gesture of support for the hospitality industry, "whose return to normality is so important for the sector. Because when they do well for us, the sector wine will be better for us, "remarked the President of the La Mancha Denomination of Origin.

A commitment to bring wine closer to the final consumer that comes from quality, "who does not understand teams or political colors," said the President of the City Council of Ciudad Real, and top leader of Fenavín, José Manuel Caballero.

The first to collect the solidarity award was the karateka Sandra Sánchez, Young Solidarity Award 2021 in "sports", culminating a round and unique season for the talaverana. The 5,000 euros of the award went to the association "Adelante CLM", dedicated to making the disease of ALS visible in society. "I wish I could change my medals to stop time and stop the advance of this disease with a vaccine for ALS", were the words of the karate fighter from the city of ceramics, excited to be able to share the moment with her friend, Juan Ramón Amores . The mayor of La Roda, also affected by ALS, shared a few words as an example of integrity and a life lesson in the first person.

The 2021 Young Solidarity Award in "communication" went to the influencer María Pombo, for her ability to reach the youngest public through Instagram, with more than two million followers. The amount of the award was given to the fight against Multiple Sclerosis Spain.

Brasero gave the 5,000 euros of the award to those affected by the La Palma volcano

Also dynamic and with great communicative capacity was precisely the Special Award for Disclosure DO La Mancha 2021 in the person of Roberto Brasero, head of the meteorology services of Antena 3. Spontaneous and natural wanted to thank from the good humor that characterizes him an award that fills him with satisfaction, since "it is the men of the fields and the wineries that reward the man of the time." Brasero gave the 5,000 euros of the award to those affected by the La Palma volcano, sealing the commitment to a geological phenomenon that he has had to narrate closely, and for which he affirms "feeling deeply grateful for the generosity and hospitality of the Palmeros to those who have put on a face. "

Finally, the final touch came with the Gran Reserva DO La Mancha Honorary Award in the figure of Pedro Almodóvar. It was his brother, Agustín Amodóvar, who received the award, comparing the expression of a land and its wines with the idiosyncrasies of his people, who "so universally has Pedro Almodóvar captured in his films."

The Minister of Agriculture, Water and Rural Development, Francisco Martínez-Arroyo was in charge of closing the event by congratulating the La Mancha Denomination of Origin in its "efforts in Madrid to recover a market that belonged to it in the past." Arroyo wanted to highlight the weight, tradition and productive muscle of a Denomination of Origin, whose surface size exceeds several autonomous communities with 15,000 registered winegrowers, more than 230 wineries and more than 1.4 million hectoliters declared last year.

Endowed with 1,000 euros, as an aid grant, these awards have the special incentive of motivating the career and talent of those professionals in the restoration. Ildefonso Salazar, Ángel López and Tomellosera María Morales were awarded the Young Maitre Award, Young Hotel Director Award and Young Chef Award, respectively.

The call has been completed with the presentation of the 2021 Young wines by 25 La Mancha wineries, who attended in the first of the two days, November 29 and 30, to the punctual appointment of San Andrés, held in Wanda Metropolitano del Atlético from Madrid.