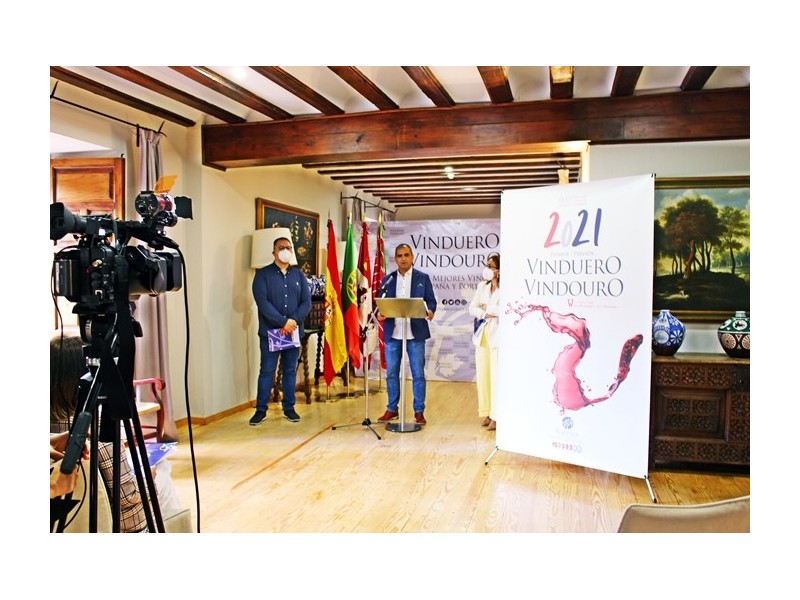 The largest International Wine Competition in Spain and Portugal is now open for entries for its 17th edition. The blind tastings will be held on 3, 4, 5 and 6 August 2021 in the Salamanca municipality of Trabanca, while the cultural and activities programme will take place in the Zamora town of Fermoselle, both located in the heart of the Arribes del Duero Natural Park.

The event was presented at a press conference at the Parador Nacional de Turismo in Zamora, by the Director General of Rural Development, María González Corral; the Vice President and Deputy of the Provincial Tourism Board of the Zamora Provincial Council, Jesús María Prada; and the President of the VinDuero-VinDouro Awards, José Luis Pascual.

The Director General for Rural Development, María González Corral, expressed the full support of the Regional Government of Castilla y León for the VinDuero-VinDouro Awards. "It is an event of consolidated reference where the role of women in the world of wine, innovation and rural development is valued".

In his speech, Jesús María Prada, Vice-President and Head of Tourism at Zamora Provincial Council, stressed that this is an event "that puts the region on the map and shows the synergies that exist between Spain and Portugal on both sides of La Raya".

For his part, the President of the VinDuero-VinDouro Awards, José Luis Pascual, pointed out that "the International Competition is consolidated as a World Reference, among the great international wine competitions, and has become, due to its rigour and quality, the great Reference to know the best wines of Spain and Portugal".

In this 2021 edition, as a novelty, the VinDuero-VinDouro Awards will present the Pascual Herrera Award to the newly launched wine that receives the best score from the jury. This award will be given to the wine with the best score among all those that launch their first vintage on the market, a prize for the courage and confidence in their own efforts and work that leads winemakers from both countries to continue undertaking in complex times, this award undoubtedly being the beginning of a successful and long career. As was the career of the person honoured with this mention in the award, Pascual Herrera, who with a career full of successes came to enjoy unanimous recognition from the world of wine that placed him at a global level where only a chosen few can reach, at the top.

Pascual Herrera's son, Manuel Herrera, who is also dedicated to the world of wine, and who for personal reasons was unable to attend the press conference, thanked the organisers in a note for "not having forgotten our father, just as sometimes you cannot forget a sunset from Spain to Portugal, just as you cannot forget that wine that we have all tasted or dreamed of tasting at some time".

The Contest will bring together, once again, the best wines from Spain and Portugal in the town of Trabanca in Salamanca to celebrate its XVII Edition, where a top-level International Jury, full of world-renowned figures, will evaluate the intrinsic quality of all the participating wines and, subsequently, with the scores awarded, will put each one in its place and the best at the top of international recognition.

These will be joined by the ARRIBE DE ORO, awarded to the wines that obtain more than 90 points and the ARRIBE DE PLATA for those wines that obtain between 85 and 90 points. Together they will make up the prestigious Guide to the Best Wines of Spain and Portugal 2021, the true jewel of this competition and the reference manual for the great lovers of wines of internationally proven quality.

For the fifth consecutive year, the Arribe de Oro awards will be presented to women. These awards, which only give prizes to those wines with a total score equal to or higher than 90 points (Gran Arribe de Oro for women and Arribes de Oro for women) are awarded taking into account only the scores of the women who make up the Tasting Committee and will be announced in the Guide to the Best Wines of Spain and Portugal 2021 according to Women.

The Competition will once again have a Tasting Committee of recognised international prestige, whose members come from the major European wine-producing countries such as Spain, Portugal, France and Italy, as well as emerging countries in the wine world such as Uruguay, Argentina and Hungary, and from major international markets such as China, among others.

Women currently account for 52% of the decision making process when it comes to purchasing wine for consumption, which is why the En Femenino scores are an added value for the hundreds of wineries participating in the International Competition.

In addition, the VinDuero-VinDouro Awards have become the authentic and unique international reference to know the best Designations of Origin of both countries, that is to say, in which territories the best wines of Spain and Portugal are produced in each category.

The Arribe de Platino Awards are special prizes dedicated to the Regulatory Councils of the Designations of Origin, to give greater visibility and recognition to the work they do and to reward the work and good work they carry out for their wineries.

The Arribe de Platino Awards are given to those DOs or IGPs that achieve the best average score in each of the categories of the Competition and this award can be publicised by all the wines of the winning DOs in each category.

Wineries and producers from Spain and Portugal can now register for the VinDuero-VinDouro 2021 awards quickly and easily through the platform inscripciones.premiosvinduero.com and also from the new APP VinDuero VinDouro which is now available free of charge for Android and IOS.

The previous edition of the International Wine Competition of Spain and Portugal, despite the difficult circumstances, once again counted with the participation of more than 900 wines from all the geographical mentions of the Iberian Peninsula and its islands and once again brought together a cast of 60 tasters of the highest level, from Spain, Portugal, France, Italy, Uruguay, Hungary and China, consolidating itself as one of the TOP Competitions worldwide and which continues to grow exponentially every year.

Due to the special circumstances, the VinDuero-VinDouro 2020 Awards Gala had to be held via Virtual Reality. In this way, more than 2,000 wineries, personalities and entities from the wine sector in Spain and Portugal were invited to participate. An event that was described by the attendees as Advanced, Original, Innovative and Pioneering in the world of wine.

This Competition has been working since 2005 to promote the Culture and Quality of wine in an exceptional enclave located in the Arribes del Duero, an area of amazing landscapes and excellent wines, which will once again host the largest International Wine Competition in Spain and Portugal on 3, 4, 5 and 6 August 2021, between Trabanca (Salamanca) and Fermoselle (Zamora).